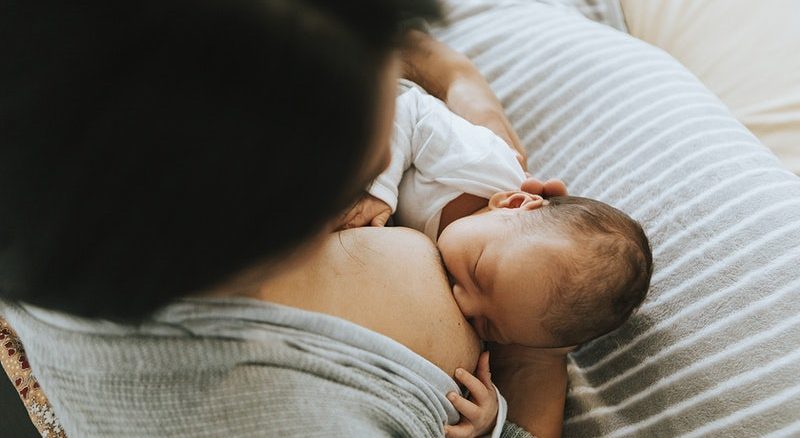 The vast majority of women produce more than enough milk. Indeed, an overabundance of milk is common. Most babies that gain too slowly, or lose weight, do so not because the mother does not have enough milk, but because the baby does not get the milk that the mother has. The usual reason that the baby does not get the milk that is available is that he is poorly latched onto the breast. This is why it is so important that the mother be shown, on the first day, how to latch a baby on properly, by someone who knows what they are doing.

Though some tenderness during the first few days is relatively common, this should be a temporary situation that lasts only a few days and should never be so bad that the mother dreads breastfeeding. Any pain that is more than mild is abnormal and is almost always due to the baby latching on poorly. Any nipple pain that is not getting better by day three or four or lasts beyond five or six days should not be ignored.

3. A breastfeeding baby needs extra water in hot weather: Not true! Breastmilk contains all the water a baby needs.

Formula feeding requires careful attention to cleanliness because formula not only does not protect the baby against infection, but also is actually a good breeding ground for bacteria and can also be easily contaminated. On the other hand, breastmilk protects the baby against infection. Washing nipples before each feeding makes breastfeeding unnecessarily complicated and washes away protective oils from the nipple.

How much milk can be pumped depends on many factors, including the mother’s stress level. The baby who breastfeeds well can get much more milk than his mother can pump. Pumping only tells you have much you can pump.

6. It is easier to bottle feed than to breastfeed : Not true!

7. Modern formulas are almost the same as breastmilk: Not true!

The same claim was made in 1900 and before. Modern formulas are only superficially similar to breastmilk. Every correction of a deficiency in formulas is advertised as an advance. Fundamentally, formulas are inexact copies based on outdated and incomplete knowledge of what breastmilk is. Formulas contain no antibodies, no living cells, no enzymes, no hormones. They contain much more aluminum, manganese, cadmium, lead and iron than breastmilk.

8.If the baby has diarrhea or vomiting, the mother should stop breastfeeding: Not true!

The best medicine for a baby’s gut infection is breastfeeding. Stop other foods for a short time, but continue breastfeeding. Breastmilk is the only fluid your baby requires when he has diarrhea and/or vomiting, except under exceptional circumstances.

9.If the mother is taking medicine she should not breastfeed: Not true!

There are very very few medicines that a mother cannot take safely while breastfeeding. A very small amount of most medicines appears in the milk, but usually in such small quantities that there is no concern. If a medicine is truly of concern, there are usually equally effective, alternative medicines that are safe.

However, a distinction needs to be made between “being on the breast” and “breastfeeding”. If a baby is actually drinking for most of 15-20 minutes on the first side, he may not want to take the second side at all. If he drinks only a minute on the first side, and then nibbles or sleeps, and does the same on the other, no amount of time will be enough.